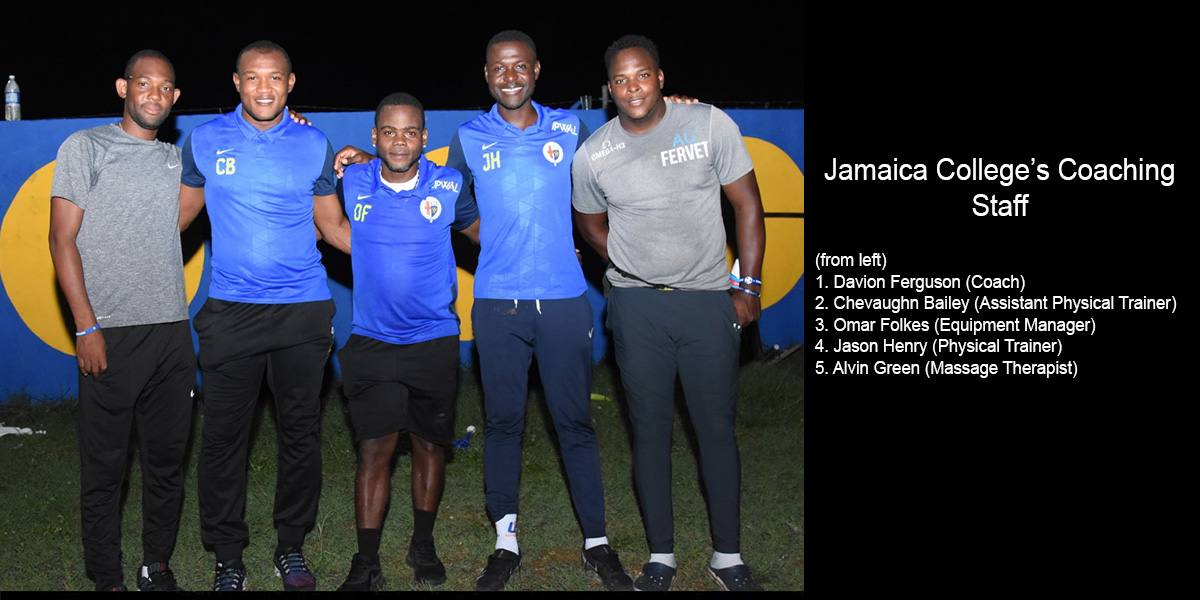 There is no better feeling than to work with known people that are trusted and this is the mantra that Davion Ferguson, coach of Jamaica College (JC), built his coaching staff around with a strong GC Foster College connection in his ISSA/Digicel Manning Cup set-up.

“It’s always good working with people that you know but most importantly competent people. I have a very good relationship with them and they have been doing well in their respective areas, so their quality would definitely speak for itself and having that familiarity helps,” said Ferguson.

Jamaica College are on course to add two more trophies to their cabinet this season as they are in the finals of the Manning Cup and Champions Cup.

Henry, who is also a fitness and conditioning coach for the Reggae Girlz, said their understanding of each other as a staff makes the perfect fit.

“It makes for a near-perfect, if not the perfect staff. That familiarity with each other from college and even three of us being in degree programme class and the same major in football. We have understood each other since 2011. We know how each other works, operates and personalities so that makes our job easier,” Henry said.

Ferguson believes GC Foster College must be credited for the vast improvement in the quality of sport development from the grassroots level. He noted that with the spread of graduates across the island, in communities and schools at every age group, young athletes are now exposed to world-class training methods.

“G.C. Foster College is the mecca as the mantra states, ‘the institution that trains world-class coaches and administrators’. It’s good to have trained and competent people across the island and GC Foster College, without a doubt, is the No 1 institution in the English-speaking Caribbean for that,” Ferguson said.

“It will benefit not just football but cricket, netball and so on. We have already seen its impact on track and field so GC Foster has to take credit for the development of sports across the island,” he added.

Henry also weighed in on the impact of GC Foster College on sports in Jamaica.

“It’s not just here at JC. We have GC graduates across the island from teaching, to coaching, right down to massage therapy. We have gone on to do extra courses to enhance our education but we give thanks to GC for setting the platform,” Henry said.